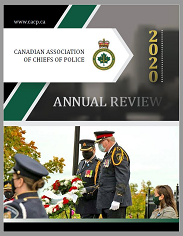 HALIFAX, NOVA SCOTIA – The Canadian Association of Chiefs of Police’s (CACP) concluded its 113th Annual Conference in Halifax, Nova Scotia today and thanked their hosts, the Halifax Regional Police, the Halifax District RCMP and the Halifax Military Police of the Canadian Forces for their outstanding program and hospitality.

It was with a heavy heart that the CACP conducted its conference at a time when tragic events were unfolding in Fredericton. It caused all delegates to reflect upon the risks inherent in this profession and to acknowledge the dedication to public safety that motivates our members to take on the responsibilities of sworn officers.

During the conference, police leaders discussed policing in the face of social, technological and structural change. The event was focused on exploring and discussing the changes that police forces across Canada will be facing and the changes that will need to be made in our respective organizations. The professional program encouraged delegates to anticipate, prepare for and address the challenges of “policing in an ever-changing world”, the theme for this year’s conference.  The following are key event highlights related to the CACP’s strategic priorities:

The work of the CACP will be undertaken under the leadership of a newly-elected President, Chief Adam Palmer from the Vancouver Police Department (refer to separate news release for additional details) who will be supported by a newly-elected Board of Directors.

As the association strives to achieve continuous improvements in policing and to strengthen the existing trust and confidence in the services we provide, it also seizes the opportunity to recognize excellence in policing and public safety. It was with great pride that eleven different awards were presented to very worthy recipients from law enforcement agencies across the country. (Refer to separate news release for additional details.)

* The resolutions adopted by the CACP membership during the 2018 Annual General Meeting are available in the Media Updates section of the CACP website at www.cacp.ca.

The Canadian Association of Chiefs of Police was established in 1905 and represents approximately 1,000 police leaders from across Canada.  The Association is dedicated to the support and promotion of efficient law enforcement and to the protection and security of the people of Canada. Through its member police chiefs and other senior police executives, the CACP represents in excess of 90% of the police community in Canada which include federal, First Nations, provincial, regional and municipal, transportation and military police leaders.