OTTAWA, ONTARIO – The Canadian Association of Chiefs of Police (CACP) is proud to announce two winners of an award recognizing outstanding effort and contributions to improving community safety and well-being in Canada through the process of inter- or multi-sector partnership, community mobilization, shared issue/problem ownership, shared outcomes and shared measurement. The CACP/Motorola Solutions Community Safety & Well-Being (CSWB) Award underscores a growing commitment among government, community-based, academic and private sector organizations to think differently about human service delivery, when and how it is applied, in what configuration it is delivered, and how success is defined.

The first recipient is the Sûreté du Québec for the successful creation and implementation of the Geolocation and New Technologies Program. Geolocation may be harmless for most Canadians, but when it comes to domestic violence, it represents a threat to the safety of victims, their children, shelter workers, and other families living in shelters. For them, geolocation is used as a particularly effective control and harassment tool by their aggressor. 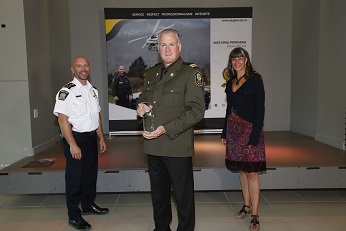 In the past, the aggressor had to use more ‘energy-intensive’ means to spy on the victim. Today, it is possible to track victims at a distance, in the comfort of  their own home. In fact, information and communications technology is now the preferred means of criminal harassment by abusers. Physical distancing is no longer a means of ensuring the safety of a victim of domestic violence because the geolocation function can allow an abuser to know the exact location where victims have sought shelter.

To respond to this emerging phenomenon, the Sûreté du Québec established an advisory committee involving government partners, police agencies, as well as domestic violence victim support agencies to produce prevention tools that explain the dangers that new technologies can present and provide advice on how to ensure the safety of all parties involved.

This project is part of the Government Action Plan on Domestic Violence 2018-2023. Ensuring anonymity is now a very complex task as geolocation allows abusers new means of control that can continue, and even increase, after a separation or break-up. The perpetrator of cyberstalking sometimes installs spyware in electronic devices and plays on the victim's fear since they never know if their attacker is likely to appear.

Shutting down a device or disconnecting victims from their social networks is not an ideal solution. When victims arrive at a shelter, they feel very isolated and experience a period of intense stress. Disconnecting them from their loved ones at this stage is obviously not helpful. Children must also be educated since they are ‘connected’ at all times.

This project has provided the police with tools to explain the safety measures to be taken to avoid being geolocated, the methods to store and collect electronic evidence, as well as steps to be taken if they wish to file a complaint.

The geolocation project stands out from other initiatives because it includes a suite of educational resources (e.g. poster, leaflet, fact sheets, guide, workshop, etc.) available in both print and electronic formats, in 16 languages, including several First Nations languages, as well as in large print for individuals with a visual impairment.

The geolocation project follows the principles of community-based policing and allows the police and victim support stakeholders to educate victims of domestic violence on the safety issues related to the use of mobile devices and provide information to help ensure their own safety by preventing remote control by the partner or ex-partner.

The geolocation project is all about prevention; allowing interveners to act upstream and protect victims of domestic violence before it is too late.

The second recipient is the Longueuil Police Service for the successful creation and implementation of the Immersion Program, a professional development training program and citizen outreach initiative that helped bring together the police and marginalized populations through partnerships with community agencies, religious groups, and educational institutions. 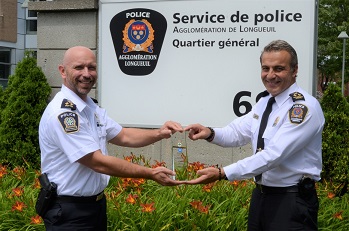 The creation of the program required collaboration between specialized police officers, the police union, the municipality, academics, as well as representatives from community organizations.

Once trained, 30 volunteer unarmed officers in civilian clothing immersed themselves in environments marked by homelessness, mental health, the autism spectrum, poverty or immigration. To increase public awareness, a journalist from La Presse was invited to participate and document the program. This resulted in the development of a 5-part series in the French-language newspaper that generated a significant amount of social media coverage and public response. These public relations efforts earned the police service the ‘January Media Hit’ award from Mesures Média. Not only did the project garner public interest, but a number of Canadian and international police agencies have also inquired about the program.

An evaluation of the Immersion Program confirmed that an experiential approach was most effective in influencing and creating visible changes in attitudes, values and behaviours. The program was an opportunity to observe the "grey areas" inherent in many situations, particularly those involving populations at risk of marginalization whose needs and realities require an adapted intervention approach. The experiential perspective also proved to be particularly effective in terms of information quality, retention and ability to put it into practice. The result: significantly improved perceptions and interactions between the police and community groups where conflict, wariness and hate once existed.