OTTAWA, ONTARIO – The Canadian Association of Chiefs of Police (CACP) is proud to announce the winners of two awards recognizing excellence, dedication and initiative to help improve road safety through education, enforcement, training and/or community-based programs.

This year, the CACP National Police Award for Traffic Safety, sponsored by Accident Support Services International Ltd., is presented to the Toronto Police Service (TPS) for the creation and success of the Vision Zero Enforcement Team (VZET).

The City of Toronto implemented the Vision Zero Road Safety Plan aimed at reducing the number of individuals killed and seriously injured in traffic collisions on the roadways of Toronto. To this end, the plan focuses on engineering, education, technology, impact evaluations, community engagement, and enforcement activities.

In January 2020, the TPS created the VZET to be deployed on the streets as a pilot. A review of the correlation between collisions and enforcement between 2001 and 2012 demonstrated a clear link. As enforcement efforts increased, collisions decreased and vise versa, as enforcement efforts decreased, the volume of collisions increased. Through further data analysis, it became evident that there was a need to adopt a laser-focused and evidence-based approach to enforcement to address the ‘Big 4’ driving offences — speeding, distracted driving, aggressive driving and impaired driving.

As a result, the VZET is strategically situated in the East end and West end of the city for increased efficiency, and the team is deployed based on data analytics that are updated as the needs change with the weather and seasons.

In October 2020, due to the success and proven sustainability of the pilot initiative, a new permanent VZET was established. At the end of 2020, the VZET had written a total of 42,372 Provincial Offence Notices of which 32,643 were for speeding, 964 were for distracted driving and 2,631 were for aggressive driving offences.

The VZET also engaged in an academic partnership with Ryerson University in 2020-2021 to look at the relationship between spatial and temporal trends associated with Vision Zero enforcement. This research identified the ticketing-motor vehicle collision relationship and recommended where and how often VZET should conduct enforcement activities. 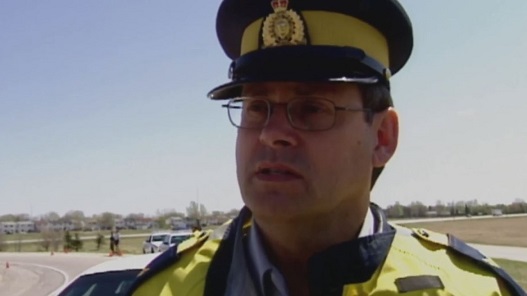 Congratulations also go out to Sergeant Larry Dalman, from the Royal Canadian Mounted Police (RCMP) in Manitoba, who was selected as this year’s recipient of the CACP Road Safety Lifetime Achievement Award, sponsored by Accident Support Services International Ltd.

Sergeant Dalman has 46 years of experience in policing, 25 of which have been devoted to the RCMP’s Traffic Services Unit. During this time, he has attended thousands of fatal car collisions, dealt with the trauma of road crashes, evaluated police  investigative approaches, and been part of the Criminal Crash Investigation Team.

One area of concern was provincial winter road closures due to blizzards. The RCMP was responsible for stopping motorists from travelling on the highways in order to prevent serious collisions and deaths. In doing so, upwards of 800 semi-trailers could be reported parked at truck stops and along the highways, sometimes blocking entire lanes. Once the highway was re-opened, it could take hours to fully clear the backlog and get all traffic mobile again.

To help address this situation, Sergeant Dalman enlisted the support of Manitoba Highways to develop a fan out system to notify transport companies, numerous other agencies, including media outlets, of the road closures. Through his continued efforts, he was able to enhance this new system with informational signs and barricades. The advanced notice and improved signage allowed the trucking industry to save hundreds of thousands of dollars and road safety in Manitoba was improved for all travelers.

Sergeant Dalman has also devoted himself to youth safety given that a large number of crashes tended to involve novice drivers. An analysis revealed that the current driver’s education program was providing very little information with respect to road safety and the police were playing a lesser role in schools.

In 2009, in consultation with Sergeant Brian Herrick from the RCMP Headingley Traffic Services Unit, Sergeant Dalman proceeded to address the need for enhanced road safety messages in schools. They created a video entitled "Smart Choices" intended for students aged 12 and up. It consists of a number of scenarios utilizing videos from the web and the use of humour to enable youth to better understand the forces involved in crashes. Sergeant Dalman enlisted the services of an Auxiliary Constable in Traffic Services to serve as the primary presenter, thereby ensuring consistency in the delivery of road safety messages.

Sergeant Dalman developed a working relationship with Manitoba Public Insurance and approached Driver’s Ed instructors and obtained the support of various School Divisions to bring the video into classrooms. As a result, road safety presentations were delivered to over 3,000 students in the first year alone.

This presentation is used in another annual proactive traffic safety learning initiative as well: the ‘Mock Crash’. This program consists of a simulated roadside crash conducted with the assistance of the McDonald Fire Rescue Department to provide students with a demonstration of the effects of a collision. This program has been offered to students in the province of Manitoba for over 20 years.

The project was expanded to include the Manitoba Brain Injury Organization and Chapel Lawn Funeral Home. Chapel Lawn provides a hearse for the deceased, the chapel to host a mock funeral attended by students, and their parking lot to host a lunch for students, teachers, staff and emergency responders where they can interact and engage in discussions.

Other partners who participate in the ‘Mock Crash’ initiative now include the Winnipeg Police Service, local fire departments, and ambulance services who help triage the actors who serve as injured patients. The media are also invited to attend in order to record and report on the event. In total, about 500 students from schools in Winnipeg and the surrounding area are reached each year.