CALGARY, ALBERTA – During the 114th Annual Conference of the Canadian Association of Chiefs of Police (CACP), the CACP presented two (2) awards recognizing excellence, dedication and the initiative of police officers whose efforts have helped improve road safety through education, enforcement, training and/or community-based programs.

This year, the CACP National Award for Traffic Safety was presented to Constable Melinda Mintenko of the Wayburn Police Service in Saskatchewan for the successful development, promotion, and implementation of the This Ride's On Us Program.

This campaign was designed to reduce impaired driving and consisted of offering people a free ride home if they were willing to hand over their keys. Those who participated were entered into weekly and monthly draws to win a prize. A positive ticketing component was also introduced to reward sober drivers with gas cards. 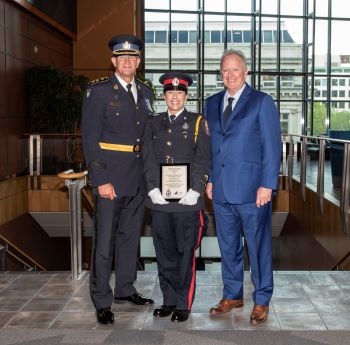 Constable Mintenko was able to obtain a provincial grant, the backing and commitment of the community’s local bars, taxi companies, many local businesses, as well as the support of the local media, SGI, MADD and the police. The program was so successful that it was extended from the original 5-month period (August to December) to 18 months. The popularity of the program was also expanded beyond its application in local bars, to include private and public events where liquor was served. Finally, the This Ride’s on Us program made an appreciable difference in the number of people charged with impaired driving in the Weyburn community and led to a reduction in the number of reports of impaired driving.

Congratulations also go out to Sergeant Colin Foster from the Calgary Police Service (CPS), who was selected as this yer's recipient of the CACP Lifetime Achievement Award for Traffic Safety.

Sergeant Foster has dedicated over 20 years of his career to investigating serious collisions, understanding why they happened, and passing on his skills to police officers.  He has shared his knowledge with colleagues and the general public with a goal to prevent tragic collisions that often involve fatalities and/or serious injuries. 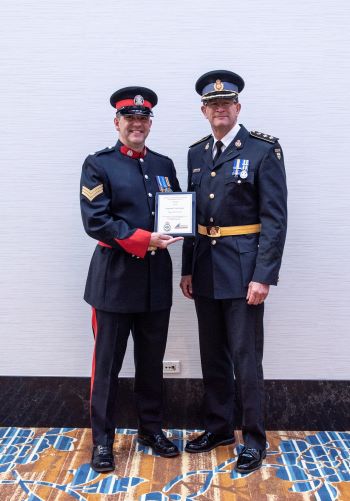 He currently oversees all major traffic investigations as the Sergeant of the Collision Reconstruction Unit, has been qualified as an expert witness on numerous occasions, has authored professional articles in the field of collision analysis, and has designed and taught the CPS collision investigation courses. He frequently works with the Crown in relation to major investigative files, advocates for the victims and their families, and has even instructed their Criminal Driving Unit about reconstruction, thereby assisting in the prosecution of these often-complex cases. He is a qualified motor officer, who is also a member of the elite VIP escort team, and he recently acquired certification as a commercial vehicle inspector. He has become the recognizable face of the Calgary Police Traffic Section, having appeared in hundreds of televised interviews and countless radio and news articles.

Congratulations to this year’s most deserving laureates!

Quote by Chief Superintendent Chuck Cox, Co-Chair of the Traffic Safety Committee: “People tend to forget that impaired driving remains one of the leading criminal causes of death and injury in Canada. This is why the efforts of Constable Mintenko and Sergeant Foster are so important. Thanks to them, the issue not only remains top of mind for the public, but their initiatives have undoubtedly saved the lives of many drivers.”

Quote by Mr. Steve Sanderson, President of Accident Support Services International Ltd.: “As a professional collision management solutions company, we are proud to sponsor the CACP Traffic Safety Awards. While we are always looking for solutions to help police services manage the disruption and disorder caused by traffic collisions, we strongly support all initiatives that help prevent crashes from happening in the first place.”