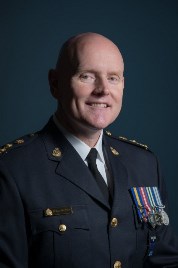 Chief Palmer took command as the 31st chief constable of the Vancouver Police Department (VPD) in 2015 after serving as Deputy Chief between 2010 and 2015. Born and raised in the Vancouver area, he began his career with the VPD in 1987, where he has worked in a variety of operational, investigative and administrative areas. Prior to joining the VPD, he studied business administration at Simon Fraser University and worked as a correctional officer.

Chief Palmer sits on the Metro Vancouver Transit Police Board, the Canadian Police Knowledge Network Board of Directors, and the Criminology Advisory Committee for Kwantlen Polytechnic University. He is a Board member of the Combined Forces Special Enforcement Unit and is a member of the Criminal Intelligence Service of Canada - National Executive Committee. 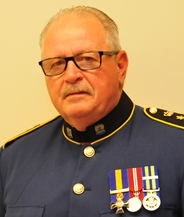 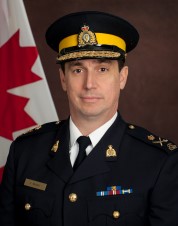 Deputy Commissioner Gilles Michaud has been a proud member of the Royal Canadian Mounted Police (RCMP) since 1986, when he was first posted to work in the Province of Quebec where he honed his Federal Policing experience from a small detachment in Mont Laurier to more specialized investigative units in St Jerome and Montreal. He eventually transferred to Ottawa where he continued his progression in the Federal Policing environment as a Commissioned Officer both within a Division and at National Headquarters.

During his 32 years of service with the Force, D/Commr. Michaud acquired a wealth of experience in the areas of organized crime, proceeds of crime and commercial crime investigations at the national and international levels. For a number of years, he was in charge of the RCMP’s National Security Criminal Investigations Program which was entrusted with investigating counter-terrorism and espionage cases.

He recently served as the first Commanding Officer of the newly-established National Division, whose mandate is to oversee the conduct of sensitive investigations of threats to Canada’s national interests, as well as, to provide protective policing services in the National Capital Region, including security for the Parliamentary Precinct, the Prime Minister of Canada and other Canadian Executives and foreign dignitaries.

In October 2016, Deputy Commissioner Gilles Michaud was appointed to lead the Force’s Federal Policing business line, which is the core line of service carried by the RCMP across Canada and around the world.

He is a recipient of the Governor General’s medal for academic achievements, as well as, the Queen’s Jubilee and RCMP Long Service medals. In January 2014, D/Commr. Michaud was also appointed Officer of the Order of Merit of the Police Forces. He is originally from St Leonard, New Brunswick and is a loving father to his two adult children. 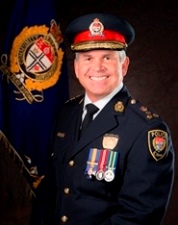 Born and raised in Ottawa, Charles Bordeleau began his policing career in 1984 and was sworn in as Chief of the Ottawa Police Service on March 5, 2012.

Chief Bordeleau has served on the boards of numerous community organizations and he has an excellent understanding and rapport with Ottawa’s growing diverse communities.  Chief Bordeleau also has well-established, strong relationships with our public safety partners at the Municipal, Provincial and Federal levels including key strategic partners in the private sector.

In 2011, Chief Bordeleau received the Dean’s Philos Award from the University of Ottawa’s Telfer School of Management. This award recognizes individuals who have demonstrated outstanding philanthropic achievement and social commitment. He sits on the Board of Directors of United Way Ottawa, is the Past Chair for the Youth Service Bureau Charitable Foundation, sits on the TELUS Community Board, on the Montfort Hospital Foundation, and the Community Foundation Board of Directors for the Ottawa Sports and Entertainment Group (OSEG).  In 2012, he was awarded the Queen’s Diamond Jubilee Medal in recognition of his contribution in building a safe and inclusive community.  In September 2014 Chief Bordeleau was invested as an Officer of the Order of Merit of the Police Forces.

He is fluently bilingual, holds a Masters in Disaster and Emergency Management from Royal Roads University (in B.C.) and a Bachelor of Administration Degree from the University of Ottawa.  He is an active volunteer in the community.  His wife Lynda is a lawyer who specializes in police labour law and they have one daughter who is in law school. 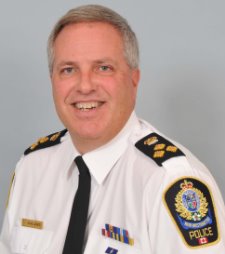 Dave P. Jones, O.O.M., began his policing career in 1982 as a volunteer with the Reserve Police Section of the NWPD. He was later hired on as a full-time officer in September of 1986.

During this time period he has led and participated in numerous major projects, including the downtown initiative that dealt with an influx of crack cocaine dealers in the late 1990s. In addition, Chief Constable Jones worked with various city departments in the creation of the Integrated Service Team (IST) model that is still in effect today that deals collectively with community and policing issues.

Chief Jones has received recognition for various investigations and events in the form of Chief Constable Commendation, Sr. Officer’s Commendation, Queen’s Jubilee Medal and the Queen’s Diamond Jubilee Medal. In May of 2013, the Governor General of Canada presented the Member of the Order of Merit of the Police Forces medal to Chief Jones, recognizing commitment to this country and to honour a career of exceptional service within policing in Canada.

Chief Jones holds a Bachelor of General Studies degree within a joint Simon Fraser University/Justice Institute of BC Leadership Development program.  Chief Jones is an active member of local, provincial and national associations of police chiefs. He is also a member of PRIME Corp Board of Directors.